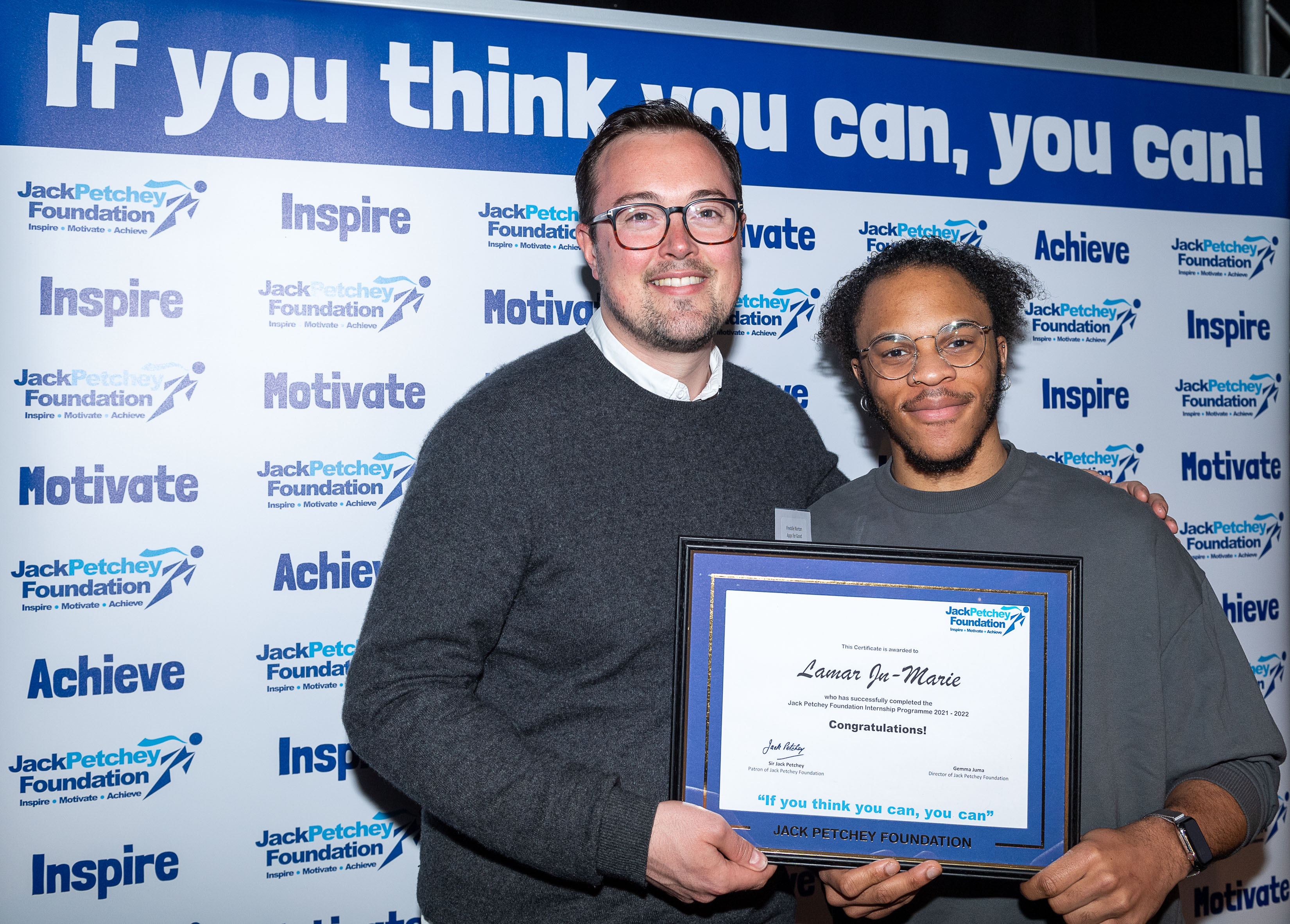 Lamar Jn-Marie with Freddie Norton, Director of Programmes at Apps for Good

As it is coming to the end of my Jack Petchey Foundation internship at Apps for Good, I wanted to share what I have been up to, what I have learnt and what I plan to do next. For a bit of context, COVID had thrown my life plans out of the window, and aged just 19, I had no idea what to do. But I saw the opportunity to work for Apps for Good and decided to go for it. I thought what do I have to lose, and luckily things went my way and it’s been a brilliant experience!

Me getting an internship placement at Apps for Good has led to a plethora of opportunities which have contributed to my further professional development. These opportunities have meant, I have been able to develop what I think is one of my weaker skills - my public speaking. I would get quite a lot of anxiety when going up to speak even to a small crowd but going into different schools and supporting Apps for Good has helped me to become more confident and meeting loads of different people eventually helped to decrease the amount of anxiety I felt when previously talking to a crowd of strangers.

Working at Apps for Good has made me realise that the opportunities they create for young people are exactly what I would have liked to have participated in back when I was In school. I think giving young people a sense that they’re being listened to is really important for development at a young age. With problems such as climate change becoming such a pressing issue, young people are already being proactive and are thinking about some possible solutions, the problem is that they have no platform to project their voice, and personally I think that Apps for Good fills that void.

Throughout the year at Apps for Good, I was trusted with the important job of keeping some of the metrics up to date, as well as managing the Expert feedback Tool, which helps connect students with industry experts. Both have been great. Being given the opportunity to provide feedback from not only experts, but also from me, to all of the young people that have submitted their ideas has been amazing. In addition, I have attended many workshops throughout the year, which has helped a lot with my professional development. To just to name a few; Developing Resilience, Communications, Networking and a Professional Development workshop. These are the areas where I felt that I lacked the most and thanks to the Jack Petchey internship, I was able to work on these areas.

This year I also managed to keep up with my own development such as becoming a snowboarding professional and attaining my BASI level 1, which was the hardest week of my life. I’ve also used the year to learn how to drive and save up for a car, in which hopefully if everything goes my way, I should pass my test in June and be on the road.

I think giving young people a sense that they’re being listened to is really important for development at a young age.”

Just go for it

I think some of my best moments have been going into the schools and seeing the excitement that the young people have on their faces, for example Denbigh High School. All of the young people had such pure excitement and happiness for some of the Apps for Good staff to come in and just listen to their ideas and answer their questions.

During the internship I learned a lot about myself and how my mind works when it comes to being in a working environment. With me being the first person in my family to choose not to go to University, there was added pressure. With my newly diagnosed ADHD I found that I have to work in an active environment to keep my mind engaged, which will be great for what I am soon to go into. As for my future I have high aspirations for myself as I will be one of the best and at the top in my industry. And so in terms of what’s next for me, I plan on working in the ski industry as an instructor. So I’ll be going back to a charity I’ve worked with before, called Snow-Camp. They will be running an apprenticeship this year, where I will be working towards my level 2 BASI so I can move and start working abroad in the Alps. I will also continue to support Apps for Good by joining their Youth Advisory Board.

Honestly if you ever thought about applying for opportunities like this just go for it, you honestly have nothing to lose. The best thing that can happen is that you get brilliant opportunities and the worst thing is you don’t, but either way, you will always gain some more experience.

Our thanks to Lamar for sharing his reflections and for his brilliant contribution to Apps for Good.