Learn about the impact of climate change on the environment

The app encourages you to learn about the impact of climate change on the environment and the changes you could make to improve the future of our planet.

What is your product and who is it for?

Our idea is to create an app (Carbon Clean) that teaches them about climate change and its effects through various games and quizzes, not only would we educate them on the ‘hot topics’ of climate change, we will also help build important habits that will be vital to securing a carbon clean future for our planet.

What inspired your idea, and why is it important to you?

We as a team are quite passionate about doing our part to stop climate change. Famous activists like Greta Thunberg have really inspired us to help stop this man-made disaster. Coincidently there will be a UN Climate Meeting in Glasgow this November, where leaders from around the world will be flying in to discuss how to stop this behemoth problem. This gave us the idea to create an app that aims to solve an aspect of climate change. That aspect is the general awareness and understanding of this topic by our peers.

How does your product solve the problem?

The quizzes and habit goals earn you in-game currency which activates the brain's reward system and encourages us to proceed for more. Our brain's note that something important is happening that's worth remembering and repeating in the future. The in-game currency is used to buy avatars and social icons, this is so they can blast their social media accounts with their progress and ranks. In doing so it will make living a sustainable life a shared goal in which teens compete for bragging rights and social status. Feature 1 - Arguably the most important out of all of them. The habit builder will essentially help build these users useful habits for a cleaner world. Users will log in their progress daily and see their data show them their new carbon footprint. When they complete a goal, they are rewarded with several coins however if they fail a goal, they will lose coins too. This will help build consistency in how frequently users use the app. Feature 2 – social media is a big part of our school community, pretty much everyone uses it. Our second feature, the social icon/avatar is the main rewarding part of the app, the user’s hard work will pay off when they can brag about the new rank or accessory their character has achieved. Feature 3 – Multiple responses from our survey mentioned wanting an app that showed them real-time climate news and educates them on the topic, so we want to do just that. Our last feature is split into two screens. The first screen will show real-time climate news for users to follow up on and the second screen will speak the language of many teens worldwide, games. The games section will be the main source of earning currency. Each game will educate the player more about climate change, its impacts, famous activists, current climate news, and what's being done to stop it. 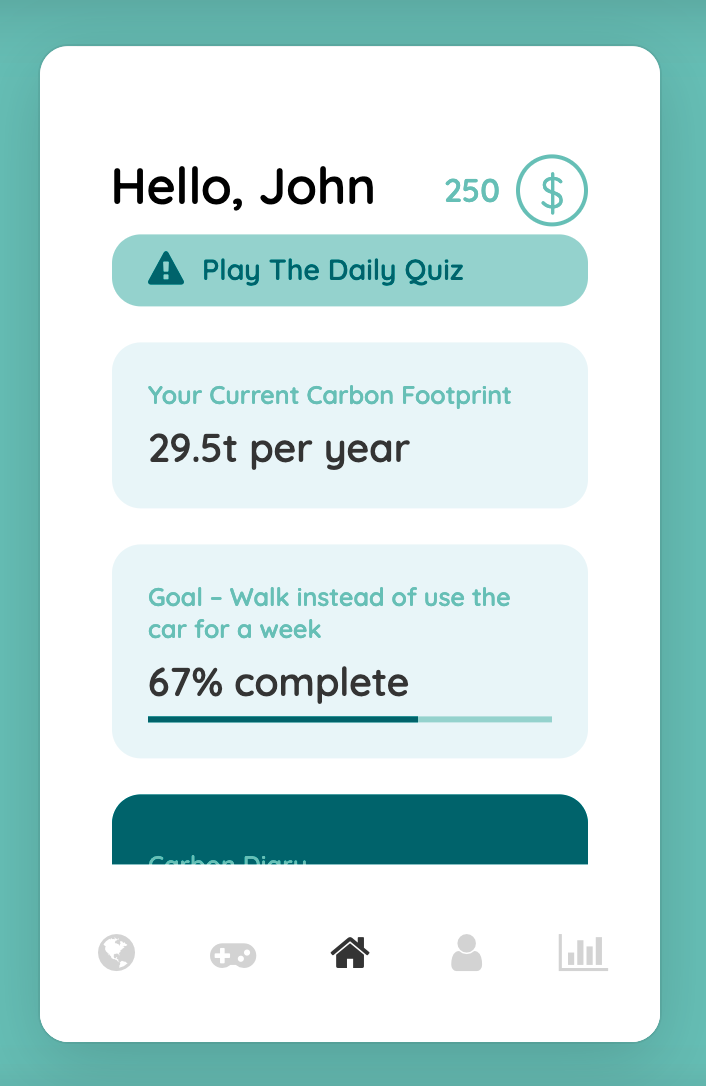 Why should your product win its category and why should people vote for you in the People’s Choice Award?

From all the hours we’ve put into this project, we have proven to you that we are dedicated to this idea, that we can adapt to difficult circumstances and still produce quality work and that we genuinely are passionate about this topic. From the various things we have done, we have shown you that we can come up with an idea, do market research to see whether there is a real need for this idea, we have designed an app based on this idea, we have filmed a video explaining what this idea is, and we have pulled all this together with a working prototype hosted on a hand-made/typed custom website which also showcases our market research, and video.

Back to cast your vote:

The Climate Creators Category is supported by: